Destined for Food to be a Focal Point 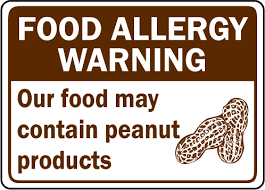 The main struggle with an eating disorder is the obsessive focus on food. It becomes a compulsive behavior where the only thing one can possibly think about is food. The thoughts and questions are irrational and repeat over and over in the mind of an anorexic person.

Twelve years later, after my treatment and recovery, I have found a healthy balance of eating well and indulging when I desire. I stopped reading labels, I strive to eat in moderation, I do not restrict myself if I have a temptation, and I do not focus on food (well, I try my best not to.)

However, I believe I am destined to have a very close relationship with food. This past October my family was struck with another food related health issue. This time involving our baby, who was 13 months old at the time. He had been admitted into a pediatric feeding clinic at 12 months old for feeding difficulties, which they declared as Sensory Processing Disorder. So we took him for outpatient feeding therapy every week so he could learn how to progress to textured foods. Six weeks later, on a Thursday afternoon, Austin got severely sick after lunch, and projectile vomited nine times. This was actually a common practice of his, so after cleaning the disgusting mess up, I thought nothing of it, except for the fact that I cannot clean up vomit one more time.

My sister-in-law, who knew he was often having vomiting responses, advised me to call my pediatrician. “Why?” I asked, “He isn’t sick.” She informed me that this was not a normal behavior, and it was happening far too much. When I called my pediatrician, he asked, “What has he eaten today?” I replied with, “A morsel of egg and applesauce.” He said, “Is he breathing?” I flipped out. Is he breathing? He is napping! I hope he is breathing. The results from his allergy testing at 12 months old were never communicated to us by our doctor’s office.

Within the next five days, he was seen by a Pediatric Allergist and Pediatric Gastroenterologist, and tested positive for five food allergies, all foods he had been fed for the entire 13 months of his little life: Milk, Wheat, Egg, Peanut, and Tree nut. He was then scoped, put under with anesthesia, which you can imagine is horrific for a mother to experience, and we were given a medical diagnosis. Austin was diagnosed with Eosinophilic Esophagitis. In other words, he has major food allergies, and I, as his mother, will be responsible for monitoring him and keeping him safe. Therefore, reading food labels has become a necessary process, and will continue to be a priority for my family.

After his esophagus healed, and he was cleared to resume eating solids after twelve weeks, Austin rejected all foods. He was then admitted into a six-week intensive feeding program at Mt. Washington Pediatric Hospital. My kid having feeding issues AND needing to attend a feeding clinic? Is this real? Well, it was, and it will forever be.

Austin was discharged one week ago from today from the six-week in-patient feeding program. He had done beautifully. He had learned how to eat, he even enjoyed eating, and had made unbelievable progress. Until yesterday…

Somebody offered him a peanut butter cracker at my gym. Yes, a PEANUT butter cracker. I watched him have an allergic reaction where he developed a rash, started wheezing, gagged and choked, and cried uncontrollably. This is called anaphalaxis, and it is no joke.

I threw my kids in the car, both screaming, started speeding to the hospital, and then my baby, 20 months old now, stopped. At that exact moment, I heard a fire truck siren coming from behind. My instincts had me park my car in the middle of the road, and stand there with an EpiPen in hand crying for help at the top of my lungs. That fire truck was either going to stop or run me over.

It stopped, the men opened the doors, grabbed my baby and called for the paramedics, who ended up transporting him immediately to the hospital where they administered an EpiPen and albuterol. They saved his life.

Food was once an enemy, has become a friend, and will forever be a focus in my family.

Thank you to the off-duty fireman who rushed to my assistance when I hit “My Rock Bottom,” and thank you to the firemen, who were responding to a different call, but stopped to save my baby’s life. I will forever be grateful to firefighters.